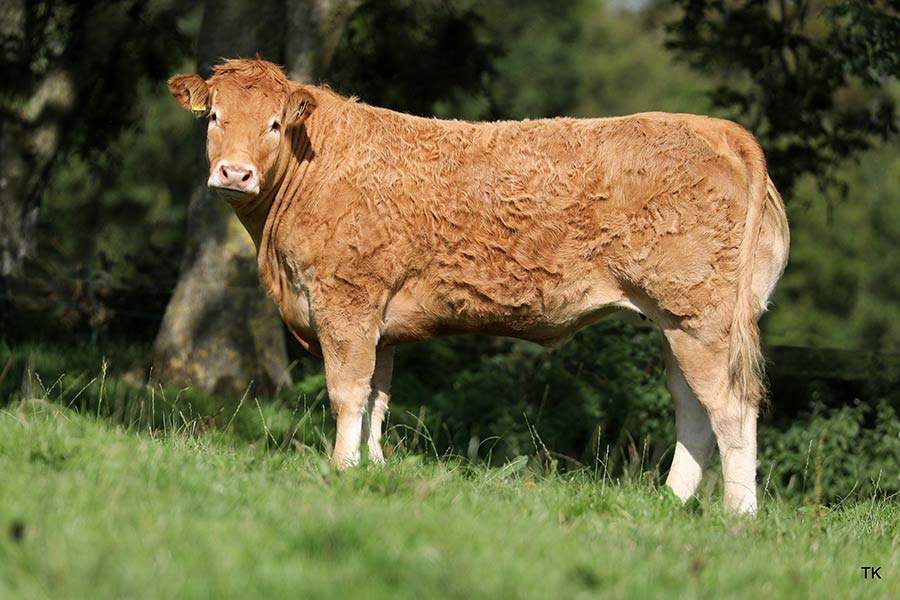 Three herds based in the South West came together on Saturday 12th September in Roscrea Mart to host a heifer and embryo sale. This sale was the eighth Genetic Advantage sale on behalf of the renowned Roundhill, Castleview and Ballybrown herds. With strict Covid guidelines adhered to the sale was also conducted online by Martbids from the Farmers Journal.

Following on from last month’s dispersal sale of the Millburn and Royal County herds, it was obvious that the appetite for quality Limousin breeding females is strong with a 100% clearance.

On offer were 39 breeding heifers many of which were four & five star from proven high index sires e.g. Bavardage, Ampertaine Commander and Ionesco. A large number of the lots were in calf to 5 star bulls such as Kaprico Eravelle and Usse.

We would like to wish all purchasers the very best with their acquisitions. Many thanks to all helpers at the sale, to the management and staff of Roscrea mart, to Shane from the Farmers Journal for managing the online bidding. Thanks to auctioneer George Candler and to Micheal and Rose for performing the tick tock duties.

The Roundhill herd had 17 heifers on offer and from this yard came the sale topper ROUNDHILL PUNANIME 1945 ET at €9,500. Punanime was destined for the show circuit this year, however she may get the chance to shine next year as after a flurry of bids she was knocked down to Bobby O’Connell of the Ballybrown herd. Punanime is bred from proven award winning genetics, her sire is the legendary champion breeder Elite Ice Cream while her dam Roundhill I Unanime 1440 was the Junior All Ireland heifer of 2014.

Thomas Doherty invested in three incalf Roundhill heifers to add to his herd based in Clare. Thomas’ first acquisition was ROUNDHILL NEWTOWN, a daughter of Grenache and the Hinz dam Kgiroflee 1635. This October 2018 heifer is in calf to Kaprico Eravelle. She has a five star Replacement Index of €164 and a Terminal index of €133.  Newtown realized €5,400.

Thomas also purchased two Bavardage daughters for €4,200. First of these girls was ROUNDHILL NGIROFLEE 1925, this December 2018 born heifer is incalf to Kaprico Eravelle. Her dam has Hortensia and Lino in her sire stack. Ngiroflee 1925 has five star ratings across the board.

The third heifer heading to the Doherty homestead is ROUNDHILL NBELLADONE 1884, a October 2018 daughter of the Lino dam Roundhill Ebelladone 1156 sold incalf to Loyal. This heifer has a Replacement index of €122 and a Terminal index of €140.

Four thousand euro was top call for the Doudou daughter ROUNDHILL NGIROFLEE 1883. Born in October 2018 this heifer is incalf to Kaprico Eravelle. Her dam has Attirant and Lino in her back pedigree. Local farmer David Talbot acquired Ngiroflee 1883.

Heading to Donegal is the Bavardage daughter ROUNDHILL NGIROFLEE 1885, the pick of Lee Graham. Multi-starred and incalf to Viking, Lee paid €3,800 for this almost 2 year old heifer.

Heading to the opposite end of the country is the Doudou daughter ROUNDHILL NORA 1869. Due to calf down next month to Viking, this heifer was snapped up by the Moore family from Co. Kerry. The hammer fell at €3,700.

Also incalf to Viking is ROUNDHILL NORA 1918, this lady was purchased by Roscommon based Adrian Kelly for €3,700. Nora 1918 has Bavardage, Vermeil and Goldies Terence in her sire stack.

The Draperhill herd acquired ROUNDHILL N NORA 1827 for €3,600 for their herd based in Dromara, Co. Down. Nora 1827 is a daughter of Roundhill Hamlet (a Roundhill Saturn son) and the Vermeil daughter Knora 1602. Nora 1827 is incalf to Kaprico Eravelle.

ROUNDHILL N UNANIME 1864 ET, an incalf daughter of Doudou and the imported French cow Unanime sold for €3,600. Unanime 1864 has five star ratings in almost all traits. She is incalf to Viking. She was purchased by Allen Fitzgerald for his Westmeath based herd.

At the same price and also by Doudou was ROUNDHILL NROMANCE 1906. This heifer’s dam G Romance 1338 is by Attirant. She sold incalf to Peter Dickenson from Wicklow.

Returning to her birth county of Limerick is ROUNDHILL NRIVIERE 1889. This daughter of Cameos was the choice of father and son team Pat and Ronan Liston for their Kildimo based herd. Nriviere has Attirant and Nelson is her back pedigree. She is incalf to polled bull Viking. Her purchase price was €3,200.

Bound for Ballyhaunis is the Bavardage daughter ROUNDHILL N LENY 1840. This incalf heifer was purchased by Donal Byrne for €2,500. January 2018 born N Leny is incalf to Kaprico Eravelle.

The yearling Doudou daughter ROUNDHILL PLENY 1955 sold for €2,400. This heifer was purchased by the Ballynagerragh herd of Neil Megarry which is based in Antrim.

We are very pleased to offer you a great group of females. The heifers presented for sale are from our proven cow families and top high reliability sires. We would like to thank our customers at our past sales. We are pleased to hear that many of our cattle sold at previous sales have done well for their new owners both in breeding terms and in the show ring.

Breeding Policy
Years of intense focus on influential cow families and strict culling has ensured that Roundhill is one of the most uniform, performance-driven and maternally powerful cow herds. The herd was much admired at the 2016 International Limousin Conference as one of the host herds. Docility, milk, fertility, soundness, udder quality and breed character continue to be priorities for our females. We strive to breed docile, functional females that calve on their own, have enough milk to rear the calf and produce fast growing well-muscled progeny full of breed character.
At Roundhill the herd is predominantly bred by A.I. An extensive embryo transfer programme is undertaken annually to ensure rapid genetic progress. The main emphasis has been on the use of proven French genetics with the aim of balancing terminal and maternal traits. However, we also enjoy showing and always look forward each year to the summer shows.

Herd Health
Our policy at Roundhill is to produce cattle with high genetic merit and a high health status. Roundhill is a member of SAC’s Premium Cattle Health Scheme (PCHS) and is accredited free of Johnes level 1 since 2009. The herd has achieved ‘BVD Negative Health Status BHS’ with the Irish national BVD eradication programme. The herd has been TB free since it’s establishment. As part of our continuous commitment to maintaining the highest possible health status, a stringent herd health programme is operated and prioritised. Cattle are vaccinated annually for Leptospirosis, IBR marker vaccine, Salmonella and for Clostridial disease in the young stock.

Performance Recording
We take a scientific approach to our Limousin breeding – since its establishment the entire herd has been performance recorded, cattle at Roundhill are linear scored and weight recorded annually. All calving difficulties are recorded, and all calves are weighed at birth. Roundhill is a member of the ICBF- Whole Herd Performance Recording WHPR and Gene Ireland Maternal programmes. The entire herd is genomically tested and parentage verified. Consequently, there are many highperformance high-index heifers available for sale. Many of them rank in the top 10% of the Limousin breed on Replacement Index and Terminal Index with high reliabilities.

Sale Heifers
We have a policy of only selling females at our biennial Genetic Advantage Sale. None of the heifers presented for sale have been flushed. All are genotyped with parentage verified.